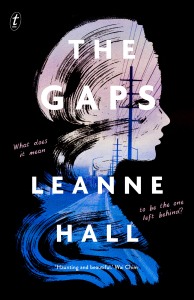 The Gaps by Leanne Hall

When sixteen-year-old Yin Mitchell is abducted, the news reverberates through the whole Year Ten class at Balmoral Ladies College. As the hours tick by, the girls know the chance of Yin being found alive is becoming smaller and smaller.

Everyone is affected by Yin’s disappearance—even scholarship student Chloe, who usually stays out of Balmoral dramas, is drawn into the maelstrom. And when she begins to form an uneasy alliance with Natalia, the queen of Year Ten, things get even more complicated.

A tribute to friendship in all its guises, The Gaps is a moving examination of vulnerability and strength, safety and danger, and the particular uncertainties young women face in the world.

Fabulous cover and I am familiar with author’s name even if I’ve not previously read her books. While I do read some contemporary YA, it’s not my preferred genre but I think I was slightly misled by the description of this book which makes me think that there’d be some mystery solving duo. It’s my own fault though for reading into it the way I wanted to rather than what it actually says. Nevertheless, I thoroughly enjoyed the reading; identified with some characters, shed some tears, and bowled over by the powerful emotions emanating from each protags.

There are 2 POVs in this story: Chloe who comes into Balmoral Ladies College on scholarship in Yr 10 and Natalia, the queen of Yr 10. While Chloe struggles to adjust herself to her new environment where not only is she demographically different but where most of these girls have known each other from primary school, Natalia appears to be in control of everything around her but internally she’s ready to combust. When Yin Mitchell, a Yr 10 student at Balmoral, disappeared, Natalia’s tight control over her thoughts and feelings begins to unspool.

What hit me most in this novel is the myriad of feelings; of confusion, grief, rage, hopelessness. They were so powerful, it was nearly overwhelming. Maybe I’ve also forgotten what it’s like to be a teen though I’ve never had an issue like this (a kidnapped friend). Yet amongst this anger against an unfair world, lives keep on rolling forward and whether you’d want to or not, you are swept along. Both Chloe & Natalia along with a number of secondary characters have grown leaps & bound throughout this novel and certainly in a very good way so I guess that’s an excellent ending for the novel. I’m left with a teeny bit of unresolved disappointment but I don’t want to spoil anyone so I’ll leave that one as vague as it is.

Leanne Hall is an author of young adult and children’s fiction. Her debut novel, This Is Shyness, won the Text Prize for Children’s and Young Adult Writing, and was followed by a sequel, Queen of the Night. Her novel for younger readers, Iris and the Tiger, won the Patricia Wrightson Prize for Children’s Literature at the 2017 NSW Premier’s Literary Awards. Leanne works as a children’s and YA specialist at an independent bookshop.