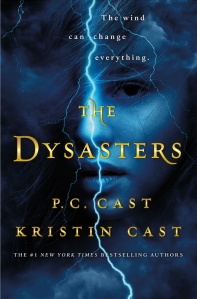 P.C. and Kristin Cast, the #1 New York Times bestselling authors of the House of Night phenomenon, return to the scene with The Dysasters—the first action-packed novel in a new paranormal fantasy series.

Adoptive daughter of a gifted scientist, Foster Stewart doesn’t live a “normal” life, (not that she’d want to). But controlling cloud formations and seeing airwaves aren’t things most eighteen year olds can do.

Small town star quarterback and quintessential dreamy boy next door, Tate “Nighthawk” Taylor has never thought much about his extra abilities. Sure, his night vision comes in handy during games, but who wouldn’t want that extra edge?

From the moment Foster and Tate collide, their worlds spiral and a deadly tornado forces them to work together, fully awakening their not-so-natural ability – the power to control air.

As they each deal with the tragic loss of loved ones, they’re caught by another devastating blow – they are the first in a group of teens genetically manipulated before birth to bond with the elements, and worse… they’re being hunted.

Now, Foster and Tate must fight to control their abilities as they learn of their past, how they came to be, who’s following them, and what tomorrow will bring… more DYSASTERS?

It seems, these days, it’s the market for teens with “special” abilities. They are so much fun to read though. I mean who doesn’t want to have a superpower?! Realistically, it’s really quite frightening thing to have (after all, with great power comes great responsibility). Scientifically, you really have to put that on the shelf and read just for fun ;)\

The main highlight of this book for me was the illustrations (see example below). Isn’t it just beautiful? They are peppered throughout the story and it’s just so good to have the characters drawn out on paper. It basically just added an extra dimension to the book. The action bits and the sweet parts made them a whole lot more exciting.

There were many ‘oh no’ and eye-roll moments in the first 2 chapters. I was finding it a little bit difficult to like these 2 characters, Foster and Tate as they are not only polar opposite of each other but also feels like their characters were exaggerated. There were so much anger and trust issues with Foster but Tate, omg, where can I find this perfect guy? Or rather his perfect parents/family? He seems to have been the only lucky one in that department. It was very unique though as to date, no one else, has his great family. In fact, it just seems too perfect.

When the action starts, however, this book was really quite fun to read. It was really enjoyable to see them coming to their abilities and how!

I do believe fans of House of Night series or even Twilight series may love this book. The only reason that I didn’t love this book but only just enjoyed it is because it was just too much cheese for me. Mind you, I’m nearing the big four-oh so I may be a tad bit cynical lol. I think this book may be perfect for teens who like their romance with their action story.

My thanks to St Martin’s Press for having me on this tour (and the Netgalley copy) and thanks to Pan Australia for paperback copy of book (arrived unsolicited but with impeccable timing!). 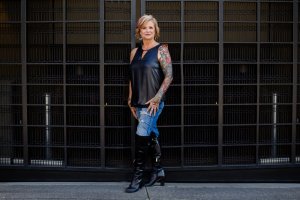 #1 New York Times & #1 USA Today bestselling author P.C. Cast was born in the Midwest, and, after her tour in the USAF, she taught high school for 15 years before retiring to write full time. PC is a member of the Oklahoma Writers Hall of Fame. Her novels have been awarded the prestigious: Oklahoma Book Award, YALSA Quick Pick for Reluctant Readers, Romantic Times Reviewers’ Choice Award, Booksellers’ Best, and many, many more. Ms. Cast is an experienced teacher and talented speaker who lives in Oregon near her fabulous daughter, her adorable pack of dogs, her crazy Maine Coon, and a bunch of horses. 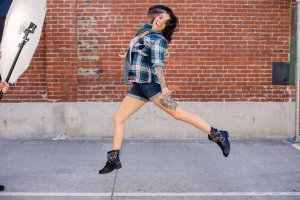 Kristin Cast is a #1 New York Times and #1 USA Today bestselling author who teams with her mother to write the wildly successful House of Night series. She has editorial credits, a thriving t-shirt line, and a passion for all things paranormal. When away from her writing desk, Kristin loves going on adventures with her friends, family, and significant other, playing with her dogs (Grace Kelly and Hobbs the Tiny Dragon), and is currently obsessed with her baby.