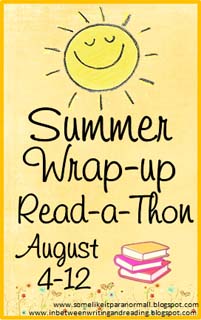 *The Pillars of the Earth by Ken Follett – I started this last week so I was on page 117 and today, I read about 90 pages.  I’m not expecting to finish this monster this week but am reading it slowly but surely 🙂

How are you all going with your goals?

Welcome to my stop of The YA of Omnific Week Blog Tour hosted by A Tale of Many Reviews.

For the month of August, all Omnific’s Young Adult etitles are on sale this month for $2.99.

It’s the year 2040, and sixteen-year-old Dez Harkly is one of the last of her kind—part of a nearly extinct race of shape-shifters descended from guardians to the Egyptian pharaohs. Her home and her secret are threatened when the Council lowers the barrier, allowing the enemy race to enter the Shythe haven.

As the Narcolym airships approach, Dez and her friends rebel against their Council and secretly train for battle. Not only is Dez wary of war and her growing affection for her best friend Jace, but she fears the change her birthday will bring. When Dez’s newfound power rockets out of control, it’s a Narcolym who could change her fate… if she can trust him.

Dez’s guarded world crumbles when she discovers why the Narcos have really come to Haven Falls, and she’s forced to choose between the race who raised her and the enemy she’s feared her whole life.

Like a badass heroine?  Dez Harkly is the one for you!  I don’t mean badass as in drug / alcohol indulgent but as in she seriously kicks ass (literally!).  Dez is strong beautiful and caring.  She has to be strong because she’s really not who she seems to be.  She’s got a lot to hide but will it stay hidden?  Her secret will rule her life and someone out there is determined to use it.

Dez is about to face the biggest change in her life when her world is turned upside down.  The Council made a Peace Treaty with their enemy and her world is now invaded with those whom she has been brought up to hate.  But are they really whom they were portrayed to be?  Her best friend, Jace, is determined to hate them and to uncover their evil plot -to rule the world of course 😉.

It was action-packed culminated in a battle (yes!) with some flyaway sparks (literally) of romance which was totally engrossing to read.  I was most appreciative of the twists and thrilling suspense in uncovering Dez and the evil plot.  Nearing the end, I really thought it was going to be a cliff-hanger ending and to my relief, it wasn’t.  Nevertheless, I was highly strung til pretty much the end :p

I’ve not read that many steampunk novels (in fact, I could probably count them on one hand!) however I have a certain notion that it has to be in a Victorian era.  Destiny’s Fire contains many corsets but it hasn’t the Victorian feel for me.  It does still fall within the steampunk genre but rather more dystopian in setting. What really drew me to this book was, of course, the cover (I’m so superficial!) and the Pharaoh’s reference (my love for Ancient Egypt is probably rooted in Stargate).  Unfortunately, there wasn’t much about the Pharaohs or Ancient Egypt, however I have my hope that maybe in the next installment…?

I think I may be over love triangles!  The love triangle was just on too high a level on my pain threshold that I was really getting uncomfortable (about halfway through the book), I was contemplating whether I could go on!  Thankfully, the dial was turned down a bit or I really would have cracked it.  But… it wasn’t off, and I really didn’t know where I was and who to cheer for…  I’m really grateful that I wasn’t left hanging at the end.

A little note at the end, I just wasn’t sure about how to read / spell “Shythe”, I keep reading / spelling it wrong in my head and it makes it sound pretty bad (my bad! :p)

Omnific is generously hosting a giveaway for one lucky person to win the Entire Omnific Young Adult Catalog! That’s a whooping 7 ebooks to gorge yourself on!!  Go to Omnific Publishing to enter.

In addition, you can also win an ebook copy of Destiny’s Fire (only), by leaving a comment letting me know your thoughts on ‘steampunk’ or ‘love triangles’ and a winner will be chosen by the ‘randomizer’.  Please do not include your email address in the comment section.  Only leave your email address on the comment form (as I will be able to access that but it will not be visible to the public).  Ends Saturday, 11th August 2012.

Don’t forget to visit all other stops!!

2 days into #SWUR and I’ve just managed to do my first post.  Not that it means I was reading that much, oh no… as always the case, the weekend usually proves to be too busy for a read.  Although I did get to read some…  Here’s my list for this readathon:

*The Pillars of the Earth by Ken Follett – I started this last week so I was on page 117 and today, I read about 90 pages.  I’m not expecting to finish this monster this week but am reading it slowly but surely 🙂

*The Immortality Virus by Christine Amsden