Thank you, Alethea, for your time and for sharing a bit about yourself & your writing journey. I can’t wait to see what’s installed for Nick & his friends!

Coffee or Tea? Coffee for work and friends, tea for relaxation.

Dog-ear or whatever else as bookmark? Whatever is nearest. Usually a ticket or receipt.

Plot or Character? Ah damn this is a hard one! Can I say both? Character is paramount, but plot is essential as well. Character trumps plot though.

Q: Could you please share with us a little bit about yourself and how you became a writer? Was there a particular book you loved as a child or how did you love of words translate to writing?

A: I’ve always loved books and writing. I devoured books as a child and spent my teenage years reading while my peers were out socialising. I was also heavily into music, and when I finished school I wanted to be a film composer, so I went and studied music composition at uni. I realised after a year that I loved literature and writing more than music so I switched degrees. I’ve been a publisher, grammarian, psychology examiner, teacher, archaeologist, and more, but writing has always been the driving force in my life. I couldn’t imagine existing without it.

A: I have always had a fascination with mythologies and cultural stories. My Bachelor of Arts majors were Literature and Classics, so as well as English Literature, I also studied Latin, Ancient Greek and classical literature. In Year 10, I did a week of work experience with an archaeologist and have always had a keen interest in archaeology as well, so much so that I went back to uni in 2010 to study archaeology. I’m particularly interested in Indigenous archaeology, and with my background in writing and teaching I wrote and published Ancient Australia Unearthed, a high school archaeology textbook, in 2014. Lightning Tracks does draw on mythologies from the ancient world, mainly Greece and Rome, and while it contains suggestions of other mythologies, none of them are taken from Aboriginal cultures. As an archaeologist and author, I’m very aware of the dangers of appropriation, so all the mythologies in Lightning Tracks are entirely my creation.

Q: I don’t know much of any Indigenous stories/legends so I’m not sure which part, if any, in Lightning Tracks, is actually part of the Australian Aboriginal story. Was there any? How much research did this involve? Are some of the names also derived from an Aboriginal dialect?

A: None of the legends in Lightning Tracks are Aboriginal stories. As a non-Indigenous Australian I have no right to tell these stories, nor can I appropriate them in any way, as they are copyrighted. The fictional legends in the novel may seem at times like Aboriginal stories, perhaps because mythologies are always representative of the people and environment in which they were created. The cultural groups in Lightning Tracks, whose ancestors arrived two thousand years ago and who are now very much grounded in the Australian landscape, have their own unique mythologies that have evolved over time to reflect this existence.

The research for Lightning Tracks was extensive, including visiting sites where parts of the novel are set, learning about different flora and fauna in the different climates and altitudes, ensuring the fictional world of Korelios reflected the archaeological record both in terms of its Roman/Greek roots and the current Australian archaeological record, and many other smaller details that are vital to world-building.

There are three main cultural groups in Lightning Tracks, all of them based loosely on real ancient cultures/regions: Roman/Greek, Persian/Middle Eastern, and North African. The character names for each group reflect their cultural origins. None of the names are Aboriginal.

Q: Please share top 3 things you’ve learnt in your journey of writing & publishing this particular book (Lightning Tracks); it could be something you learnt of yourself, about writing/publishing, a particular touching story from a research, etc.

A: I think the top of my learning curve list would have to be self-publishing. Lightning Tracks has come close on a couple of occasions to being accepted by traditional publishers, but never made it past the marketing department, perhaps because the novel crosses genres and doesn’t fit neatly into a single box. Deciding to self-publish was the next logical step. I’d already self-published an archaeology book, so I thought this one would be similar and easier. I can say unequivocally that self-publishing fiction is an entirely different arena to non-fiction!

Second would have to be the importance of accepting that a novel is finished. If I don’t set myself deadlines, I could work on a book for much longer than is necessary.

And third, it’s so thrilling to draw on many branches of knowledge and research and combine them to create something new. I thoroughly enjoy this aspect of writing.

Q: What are your top reads for 2018 to date? And which book are you desperately waiting for publication?

A: I’m currently reading Found by Fleur Ferris (I adore her work). I’ve ordered Ellie Marney’s Circus Hearts series (they haven’t arrived in the mail yet but I’m looking forward to reading these beauties), and I am always awaiting the next Patrick Ness.

Oooh, you’d love Circus Hearts! Ellie Marney is the BEST! I love Fleur Ferris too though not a big fan of Patrick Ness… just haven’t really got into his books, really. ~T

Q: What are you working on now? Or what can we look for from you next? I’m hoping it’s the sequel to Lightning Tracks! How many books can we expect in the series?

A: I’ve got a few writing and archaeology projects on the go, including a YA novel for my creative writing PhD, and I’ve almost finished the sequel to Lightning Tracks, which I’m aiming to release in mid-2019. There will be three books in the Song Gate series, with an undecided fourth. So stay tuned!

You can check out my thoughts on Lightning Tracks, here, and you can purchase it from following links: Amazon | B&N Nook | iBooks  |  kobo

A. A. Kinsela is a pseudonym for Alethea Kinsela 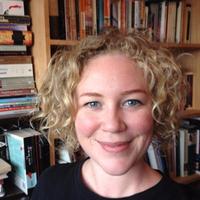 I’m a writer/teacher/archaeologist/jack-of-all-trades. My latest book Lightning Tracks is a dark YA alternative history/fantasy novel set in Australia. You can read an extract on my website. I’ve also got a little educational textbook about Australian archaeology, Ancient Australia Unearthed.

I’m halfway through a Creative Writing PhD, and I sometimes teach in the School of Education at La Trobe University and host writing and archaeology workshops for kids and teachers.

The rider angled the blade so Nick could see the oily residue on the metal.

‘All that’s needed to kill you, boy, is a single cut. A scratch. The poison will do the rest.’ His mask shifted, and Nick could’ve sworn he was smiling. ‘But that wouldn’t be any fun, would it?’

Nick gulped. ‘Why are you doing this?’

The rider leaned closer and hissed, ‘Because you exist.’

Nick isn’t a warrior. He knows some basic karate, but that’s it.

So when an assassin turns up to settle a blood debt, Nick narrowly escapes with his life. In his haste, he unwittingly flees to Korelios, a place he thought existed only in his eccentric aunt’s ancient legends.

All too soon, he finds himself caught in the middle of a war, and he must make an impossible choice: do his duty or follow his heart.

His choice will decide the fate of an entire civilisation.

Lightning Tracks also contained one of my favourite tropes, world within a world; specifically a gateway from our present-times Australia to another world (albeit hidden) where Empires rule over the world. There isn’t a Roman Empire as such, in fact, all the empires and/or races in the story are made up though loosely based on Romans, Greek, etc. I thought there was also an Indigenous spin but it appears I was wrong (see tomorrow’s Q&A post with the author).

The novel opens with Nick getting into trouble at school on his sixteenth birthday. When he got home that day, he found himself fighting for his life and having to flee, found himself in a part of Australia he didn’t know existed but yet some things felt familiar. A very exciting start to the story, for sure! Nick has to quickly find out all he can about this world and his position in it as there is a war brewing; hostilities escalating on both sides and atrocities abound.

There is actually a second perspective to this story, Cal, a highlander boy kidnapped to be a soldier of the Empire. He has been very obedient so far (even in committing a most atrocious act) due to the threat to his family’s lives but event transpired which had him running for his life. For both Cal & Nick, the answer lies in the city Auremos, the rebellion centre of strength.

I liked both characters & perspectives. Nick, a troublesome teen, is not actually aggressive but is rather thoughtful & kind. He’s got a temper which he has to learn to control. Cal, on the other hand, has been trained to be calculated in his moves and he kicks ass!

Lightning Tracks takes the readers on an adventure in Australia’s hidden depth. However, it reads more like a fantasy novel with a couple jarring mentions of Australia. With betrayals, tragedies, secrets, and battles, Lightning Tracks is an exciting & fascinating read for all teens especially for those who feel they are different (like Nick).

Thanks to the author, A.A. Kinsella, for copy of book in exchange of honest review.

A. A. Kinsela is a pseudonym for Alethea Kinsela

I’m a writer/teacher/archaeologist/jack-of-all-trades. My latest book Lightning Tracks is a dark YA alternative history/fantasy novel set in Australia. You can read an extract on my website. I’ve also got a little educational textbook about Australian archaeology, Ancient Australia Unearthed.

I’m halfway through a Creative Writing PhD, and I sometimes teach in the School of Education at La Trobe University and host writing and archaeology workshops for kids and teachers.