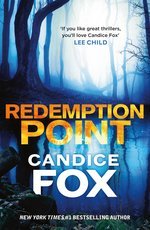 #1 New York Times bestselling author Candice Fox delivers a compulsive new crime thriller, which sees Ted Conkaffey once again teaming up with an unlikely partner – this time the father of the girl he was accused of abducting . . .

When former police detective Ted Conkaffey was wrongly accused of abducting thirteen-year-old Claire Bingley, he hoped the Queensland rainforest town of Crimson Lake would be a good place to disappear. But nowhere is safe from Claire’s devastated father.

Dale Bingley has a brutal revenge plan all worked out – and if Ted doesn’t help find the real abductor, he’ll be its first casualty.

Meanwhile, in a dark roadside hovel called the Barking Frog Inn, the bodies of two young bartenders lie on the beer-sodden floor. It’s Detective Inspector Pip Sweeney’s first homicide investigation – complicated by the arrival of private detective Amanda Pharrell to ‘assist’ on the case. Amanda’s conviction for murder a decade ago has left her with some odd behavioural traits, top-to-toe tatts – and a keen eye for killers.

For Ted and Amanda, the hunt for the truth will draw them into a violent dance with evil. Redemption is certainly on the cards – but it may well cost them their lives . . .

Wishes do come true! Well… sort of! I wanted more of Ted & Amanda and I also wanted to hear a bit of from Amanda (my wish was in my review for the first book, Crimson Lake, so if you’re reading this, Candice, my thanks x). Redemption Point gave me both though Amanda Pharrell is still just as excruciatingly elusive. Excruciating in the sense that I just couldn’t see how she thinks but she’s just as entertaining and frustrating as ever!

How do you solve a problem like Amanda?
How do you catch a cloud and pin it down?
How do you find a word that means Amanda?
A flibbertijibbet! A will-o’-the wisp! A clown!

In this book, Ted and Amanda spent quite a lot of time on their own so it made sense to have multiple perspectives even though that mean we barely see them interact however there were a couple other perspectives and one of which gave me the willies. It was in the form of diary entries and was, therefore, very intimate and confessional. I was very uncomfortable with this, at the beginning, due to the character’s thoughts but halfway through I could just appreciate the additional thrills and suspense this perspective add to the book.

Ted, despite his best effort to bury himself, was forced to face up to the Claire Bingley’s abduction that he was wrongly accused for. He had resisted looking into the matter but he could no longer shy away. A confrontation with Claire’s father, Dale, combined with Ted’s own generous heart may just come to end the matter once for all… but for whom?

Amanda mostly had to investigate the murders at Barking Frog Inn (don’t you just love this name?!) without Ted though that did not mean she didn’t have any assistance. In the form of Detective Inspector Pip Sweeney who carried her own dark shameful secret. Ted may be missing in action but Amanda & Pip were just as on point. And that ending! Gah! *gagging myself from spoiling everything!*

Aside from amazing characters, I love the vivid descriptions in this novel. It’s one thing to have a vivid imagination but to be able to write them down without boring your reader, that’s skill. I feel and ‘see’ the humid lush isolated Queensland town. I love to live there in my imagination but not IRL lol

Between the houses on the other side of the creek lay thick tangles of rainforest, impenetrable by the eye, walls of crossing vines and elephant ear leaves wet and dripping…

Redemption Point is an amazingly crafted crime thriller. Tension was taut right from the very beginning and it just gets tighter; so strung up that by ending you don’t know whether to cry from heartbreak or relief. These poor characters get no break whatsoever especially Ted. And can I get back to that ending?! Just spectacular… I need book 3 (I’m hoping there is one…).

Hades, Candice Fox’s first novel, won the Ned Kelly Award for best debut in 2014 from the Australian Crime Writers Association. The sequel, Eden, won the Ned Kelly Award for best crime novel in 2015, making Candice only the second author to win these accolades back to back. Her third novel, Fall, was shortlisted for the 2016 Ned Kelly and Davitt awards. She is also the author of the bestselling Crimson Lake, which introduces a new series character, Ted Conkaffey.

In 2015 Candice began collaborating with James Patterson. Their first novel together, Never Never, set in the vast Australian outback, was a huge bestseller in Australia and went straight to number 1 on the New York Times bestseller list in the US and also to the top of the charts in the UK. Its sequel, Fifty Fifty, was released in August 2017 and she is currently working on their third collaboration. They have also co-written a prequel novella, Black & Blue, as part of the James Patterson BookShots series.