Nobody But Him by Victoria Purman

I’m a city girl through and through. I was born and grew up metropolitan cities. There would be days though when I love the thought of a Seachange. We love the beach and would happily live by the beach. Then again, I can’t really picture that particular type of life. For me, it’s a Dream; the city is my home. I am surrounded by my friends and family.

The main appeal of this romance is the encounter with your first love once again. Don’t we all have that little bit of wonder in us, how did her turn out to be? Will there still be an attraction? Can we still hit it off? Even if, your heart was broken it was first over. The possibility of a second chance –not only for love, but for life.

Julia Jones ran away many years ago and still is running. Even the encounter with her first love wasn’t quite enough to convince her to stop until something happened which made her face what it is she’s running from and to realise what ‘home’ really means for her.

It’s confession time and I have to admit of having flicked through the ending about midway through the novel. I was determined to be good and go to bed on time and I knew that I wasn’t going to be able to sleep without knowing what’s going to happen sooooo… I took a peek :p In turn, this made me totally impatient in reading the second half of the novel even after knowing the ending! I was impatient to find out when “that” moment will hit Julia, to read “that” moment they’d finally sit down and talked like sensible people, to finally close the novel with “that” feeling of satisfaction and contentment.

I loved that it’s set at an Aussie beachside town including the good ol’ pub. It touches slightly on what life is like at a small town, the good and the bad, though of course, mostly in how it affects the main characters. I very much liked that Ry took the first mature step and I loved the way all was resolved.

This was totally a feel-good sort of story to fulfil my romantic craving. As with all romance novels I read, I also got frustrated with how the plot twists and turns but that’s what romance fiction is all about –the sparks, the tension, the epiphany, and HEA. Nobody But Him is the first instalment of Victoria Purman’s Boys of Summer series and I look forward to her next instalment with great anticipation.

Sooo… I’ve pretty much have been offline for the last month due to lack of internet connection at our New Home.  Yay, we have moved!  Unfortunately, it’s a new-ish sort of area that we almost couldn’t get broadband! We were told that none of our neighbours could get any -wondered how they put up with that since they’ve been living here for over a year?!#firstworldproblem

In any case, we’re back online yesterday evening (Woot!) and here I am with plenty of update which I’ll keep short and stacks of overdue reviews!

Job move: I’m settling in well. Made some silly mistakes (as you would) but am otherwise enjoying the different environment and a more relaxed pace.

House move: All we’ve left is the dishwasher (delivered but not yet installed), a big stack of boxes to unpack in the garage (I’d bet that if I don’t unpack them, I probably won’t miss those stuff!), a bigger stack of boxes ready for disposal, oh, and the BLINDS… where are MY blinds?  Hoping to see them in the next fortnight.  Ah, I’m also needing an extra bookshelf.  I’ve been wondering why I haven’t seen any bookshelf giveaway?  C’mon, peeps, millions of Books giveaway but we also need bookshelf. lol

Today’s Hunt: Bloomsbury Australia organised a Book Hunt for The Signature of All Things and I just had to go.  I was mainly curious as to how they’d put this together and really to take some nice photos since there’ll be such lovely views at the Sydney Royal Botanic Garden.  When I registered and was given a set of clues (see below), I thought, “um, right, I’ll never find one!  I’m hopeless at treasure hunt clues / trivia / nature”.  Have not had Coffee at that stage either, ugh!  So, the strategy was to walk around and just read each board which described the things around the park and lucky me, I found one (yippee!!)…  Thanks, Bloomsbury Australia, for such a fun bookish event!  Please note, the token wasn’t as visible as shown below though it was on the same spot, it was hidden underneath the board. 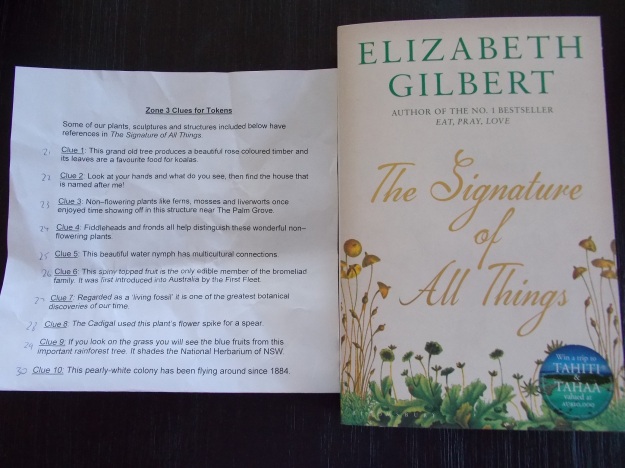 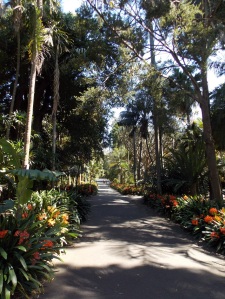 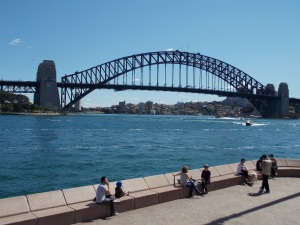 It was a terrifically beautiful Sydney day 😀

Giveaway: Thanks to Harlequin Australia, I have an uncorrected proof of Nobody But Him by Victoria Purman to giveaway to one of you!  Aussies only, sorry, really can’t afford shipping to any other location.

At the age of eighteen, Julia Jones left her hometown — the small beachside town of Middle Point — with a head full of grand plans. Plans for an exciting life in a town that didn’t involve a main street with one pub or a particular boy named Ryan Blackburn.

But after fifteen years and a lifetime later, Julia’s forced to put her career and big-city life on hold when she returns home to finalise her mother’s estate. Which is exactly where she runs smack-bang into the town’s hero, Ry. As in Ryan Blackburn.

The sensible thing to do? Stay the hell away from him and head back to Melbourne as fast as her stilettos can carry her! But instead, Julia finds his offer of a helping hand and a hot body too delicious to refuse.

Soon, Julia’s ignoring her better judgement and diving into an ‘I’ll think about it tomorrow’ fling with Ry. But what she doesn’t realise is that tomorrow has a way of sneaking up on you…and that saying goodbye to her home town — and to Ry — is so much harder the second time around.

Just leave a comment below to enter above giveaway.  Please do not include your email address in body of your comment, just in the form, as requested.  Open until 9pm Sydney time (Tuesday, 24th September 2013) and if you respond to my email quickly enough, you may just receive the book the day before it’s released to the public 😉