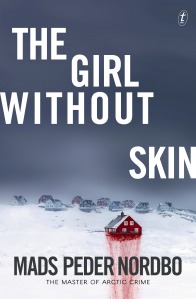 The Girl Without Skin (Grønland – Greenland #1) by Mads Peder Nordbo

They were near the edge of the glacier. The sea beneath the helicopter was dense with pack ice. In front of them, the endless whiteness stretched as far as the light could reach. It hurt his eyes. Millions of white crystals. Except in one place. One spot. Right where the mummified Norseman had been found and Aqqalu had kept watch. There, the ice was glossy red.

When a mummified Viking corpse is discovered in a crevasse out on the edge of an ice sheet, journalist Matthew Cave is sent to cover the story. The next day the mummy is gone, and the body of the policeman who was keeping watch is found naked and flayed—exactly like the victims in a gruesome series of murders that terrified the remote town of Nuuk in the 1970s.

As Matt investigates, he is shocked by the deprivation and brutal violence the locals take for granted. Unable to trust the police, he begins to suspect a cover-up. It’s only when he meets a young Inuit woman, Tupaarnaq, convicted of killing her parents and two small sisters, that Matt starts to realise how deep this story goes—and how much danger he is in.

I’ve watched pretty much all the Nordic crime shows on Netflix which is one reason I’m interested in this book. The title itself, The Girl Without Skin, is intriguing despite the promised gruesomeness. But I’m still not quite sure how this title work… it’s definitely not a literal meaning.

The opening chapter captured my interest easily despite breaking heart. Matthew Cave lost all meaning to his life in one horrific accident. He fled and found himself in Nuuk (Greenland). When a mummified corpse was found, he expected it to be a worldwide breaking news but instead it set off a series of murders that are eerily similar to the one in 1970s.

About 70% of the book is told from Matthew’s perspective in the present time as he followed up clues to crack this mystery. The rest of the book is journal entries by a police officer in the 70s who investigated those murders but then disappeared, leaving this notebook behind. The root of the mystery though is not the murders themselves but something else that is dark and has never yet seen the light.

At roughly halfway through the book Matthew appeared to have gained a sidekick, Tupaarnaq. Though really, I reckon he’s the sidekick in this partnership; Tupaarnaq is one tough chick -hiding a world of hurt. I don’t know if anyone else sees this but she reminds me of Amanda Pharrell from Crimson Lake series (except for Amanda’s unique & quirky sense of humour).  I’d be more interested to hear her perspective.

I very much enjoyed the setting, atmosphere, & cultural differences I found in The Girl Without Skin but overall, I didn’t particularly found the mystery engaging. I wasn’t surprised by any twists and found myself disappointed by how easily the mysteries of Tupaarnaq’s past (um, yes, I Googled on how to pronounce that name!) & Matthew’s father’s disappearance were dismissed. I’d be interested in the sequel though as I’d like to see the development of this partnership.

Thanks to Text Publishing for copy of book in exchange of honest review.

Mads Peder Nordbo is Danish but has lived in Nuuk for several years. Born in 1970, he hold degrees in Literature, Communications and Philosophy from The University of Southern Denmark and the University of Stockholm. Mads has lived in Denmark, Sweden, Germany and Greenland. He works in communications at the Town Hall in Nuuk, where he amongst other things, writes for the mayor of the municipality, Kommuneqarfik Sermersooq, which stretches across the Greenland ice sheet. Mads Peder Nordbo is the author of three novels. THE GIRL WITHOUT SKIN is his debut as a crime writer.