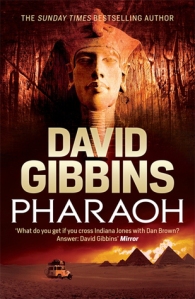 Pharaoh by David Gibbins
My rating: 2 of 5 stars

I’m slightly obsessed with ancient Egypt (thanks to Stargate) so when I saw this book on Edelweiss, I really thought it could be a fun read. For one reason or another, I didn’t find out that this was the 7th instalment of Jack Howard series until quite a bit later and as I just don’t have the time or energy these days (new house & job), I was hoping this book could just stand on its own.

For the most part, reading this book by itself really wasn’t an issue. As the blurb on Goodreads would tell you, this book alternated between 3 timelines though mostly not on the Present Day. Therefore, it tends to be a non-issue reading this as a stand alone as the stories could be enjoyed as short stories that are somewhat linked throughout the 3 timelines.

The ancient Egypt timeline was actually quite short so the bulk of the novel is taken up with the 19th century timeline which was had interesting characters and pretty good plot. This part of the novel, as far as I’m concern, is what saved the book from a 1 star rating. The present timeline with Jack Howard and co was rather lack-lustre. There was not meaty substance; no character development and filler type of story which was neither here nor there. There were a few times that I got caught thinking, ‘oh, here we go, a CONFLICT’, just to be deflated a few seconds later.

Based on my experience on Pharaoh, this is not a series that I’d be willing to explore without sparkly recommendation from a trustworthy source. I wonder if there are any fans of this series out there who can tell me if earlier books are good?