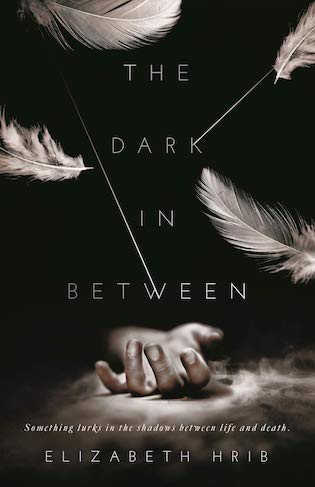 Action-packed and emotionally powerful like big- and small-screen hits such as The Sixth Sense and Supernatural, The Dark In-Between by Elizabeth Hrib is sure to stay with you long after the lights go out.

Something lurks in the shadows between life and death.

A terrible accident brings sixteen-year-old Casey Everett’s life to a halt—literally. Pulled from the water, Casey is rushed to the hospital and miraculously revived. But her sudden return to the living is shadowed by the drowning of her best friend, Liddy.

Overcome with grief, Casey returns home for the summer only to find the memories of the accident won’t let her go. Shadow-drenched nightmares. Whispers in the back of her mind. Her friend’s screams. Casey thinks she’s losing it… until she watches a boy fall from the sky.

Red—an angel fallen to earth to regain his wings—takes her to Limbo, a place that exists somewhere between the living and the dead. Now, in order to save her best friend, Casey must learn to walk these mysterious and dangerous paths or else risk losing Liddy’s trapped soul to something worse than death.

The Dark In-Between is a fast & easy read. It was easy to get into and time really did fly when I was reading this; did not realise it was past midnight by the time I was finished!

The opening scene is a beautiful summer’s day and 2 best friends were having the best of time on water until tragedy struck. Unfortunately, one of them dies and the other had to face life without her. Casey Everett lost her parents some time ago and now, she lost her BFF, Liddy; it feels like no one is safe around her. She also could not stop dreaming of Liddy but unbeknown to her, it is actually Liddy’s soul calling out to her for help. Then comes Red, the fallen angel, her guardian to point the way to the in-between.

Fallen angels. I’m not a fan of this trope but I didn’t particularly mind it too much here. Red provides much wisdom and the dynamics between him and Evan, Casey’s other best friend, is all hilarity. I loved the interaction between Evan an Casey too as they explore the possibility of going from best friend to maybe something more; it was very sweet.

Overall, I enjoyed The Dark In-Between more as a fluffy comfort read. It was just really easy to read and follow and that action at the end was just fantastic. I do have one question which makes me question that even as the book feels like it’s supposed to be a stand alone but that little ‘question’ was left in case of the possibility of a sequel. I’d like to see what that’d be.

Elizabeth Hrib was born and raised in London, Ontario where she studied nursing at Western University. She now calls the East Coast home, where she works as a nurse in Halifax. When she’s not working or writing, she can be found at the piano, planning her next Netflix binge, or attempting to keep her small, windowsill garden alive.

Mari, Nik, and their newly formed Pack are being hunted. Thaddeus and the God of Death will stop at nothing until they are obliterated from the earth. But Mari and Nik have one goal: to reach the plains of the Wind Riders in order to band together to stop Thaddeus from destroying all that Mari and Nik hold dear.

But will the mysterious Wind Riders accept the Pack, or will Mari and Nik and their people be rejected by the mighty Riders and be forced to flee for their lives? And what happens when a rogue Lead Stallion gets too close to the Pack, rejecting all Wind Riders and turning to a stranger for companionship instead?

‘While many fantasy series style themselves as epic, this one may actually be worthy of the description.’ School Library Journal

Please note this is a review of book 3 of Tales of a New World trilogy, click here for Moon Chosen’s (book 1) review or here for Sun Warrior’s (book 2) review.

Wind Rider follows on directly from the ending of Sun Warrior and if you’ve been following the tale, you’d know exactly where they are going. The tile also kinda gave that away! The first chapter of this book, however, did not open with the Pack but rather introduced a very interesting new perspective; River -daughter of a Wind Rider. Every few chapters, there is a chapter about River and I absolutely adored her adventures!

Nik & Mari and their Pack continued their journey to find a new home they can settle into. As they travel through dangerous territories, led by Antreas and Bast, the Pack bonded through working together and helping each other as they struggle through the unfamiliar and threatening surroundings. I did feel that these chapters dragged a bit. It just took them forever and a day to reach their destinations. Whilst their adventures could be an exciting read, I felt there was something forced and therefore, a bit awkward. There were bits where Mari felt proud of her Pack of one thing or another (it happened multiple times) and while I understood the need to highlight just how well the Pack is getting along, I feel like the author needed to justify the direction Mari has taken?!

Death had established himself in the Tribe of Trees. We read his terrible deeds through the perspective of Ralina, a Storyteller of the Tribe of Trees. Death kept her close at hand as he wished his godly feats to be told in stories through time. I found Ralina to be most admirable character. She chose to stay to help the her people and her strength, courage, and canniness will ensure that the world will hear of how the horrific destruction Death swept throughout the lands.

I have definitely enjoyed the secondary perspectives a lot more. They didn’t give me the awkward feeling Mari’s did. I’d like to read more about them & their struggles. Plus all romances that sprung all around were rather cute! I want to read about those too.

It was strange that the end of this book did NOT actually complete the story. Despite the note, “third novel in the compelling ‘Tales of a New World’ trilogy“, which should mean that this is the finale, the story definitely did NOT end. Without giving too much away, I don’t believe the climax has yet been reached so I’m confused. Are we expecting a spin-off trilogy or something? I don’t know… so, it’s rather unsatisfying since I expected a well-rounded finish to this tale and I do want to finish this tale so I hope for at least another book to be coming soon.

[Edited: I’ve just been informed this ‘trilogy’ is now actually a quartet. So there is one more book to look forward to!]

Thanks to Pan Australia for copy of book in exchange of honest review.

PC was born in the Midwest, and, after her tour in the USAF, she taught high school for 15 years before retiring to write full time. PC is a member of the Oklahoma Writers Hall of Fame. Her novels have been awarded the prestigious: Oklahoma Book Award, YALSA Quick Pick for Reluctant Readers, Romantic Times Reviewers’ Choice Award, Booksellers’ Best, and many, many more. Ms. Cast is an experienced teacher and talented speaker who lives in Oregon near her fabulous daughter, her adorable pack of dogs, her crazy Maine Coon, and a bunch of horses.

The second novel in the epic ‘Tales of a New World’ trilogy by New York Times bestselling author P.C. Cast.

The battle lines have been drawn.

Once from rival clans, Mari, an Earth Walker, and Nik, a Companion, now find themselves fighting to save each other and their people from destruction.

Thaddeus has betrayed his own people, killing Nik’s father and destroying their entire clan. But he wants more. He wants the power he believes Mari has stolen from him and his people, and he will do anything to get it back, even if it means destroying everything in his path. There is only one way to stop Thaddeus, and it means a harrowing journey for Mari and Nik into the heart of darkness.

“P.C. Cast builds an engaging world and cleverly smudges the line between fantasy and speculative fiction . . . the world and the slowly rising tension of the story are spooky, compelling and fun.” Good Reading

Please note this is a review of book 2 of Tales of a New World trilogy, click here for Moon Chosen’s (book 1) review,

This book made me totally heartsick. I was heartsick for my pug who died a few years ago. We’ve yet to adopt a new dog though we have been talking it over a lot this year. But it would have been perfect to have a four-legged companion or two to cuddle while reading this book.

Sun Warrior picked up immediately after the end of Moon Chosen (book 1) and we found Nik & Mari escaping from the fire & chaos. Without giving too much away, a lot of bad things have happened near the end of book 1 which made it impossible for Nik & Mari to live peacefully in this area. This big book expanded on the consequences of the previous bad things and add to that the even more big bad awful things that are about to unfold in book 3, Sun Warrior. Unfortunately, it does feel like a filler book where a lot has happened but nothing really happen…

There were certain choices made in this book which I questioned and hoped they’d be explained in the next book. I found it also a little strange and maybe even irksome that all the power seem to be in Mari. I keep hoping something to happen to Nik but errr, he just seems hopeless?! I get the matriarchal society and equality etc etc etc but all the power appears to be Mari’s… I am glad that I waited to read this book because it raises a lot of questions I’m hoping to be answered very soon.

Whilst this trilogy is mostly told from Nik’s & Mari’s POVs, there are a few other minor POVs just so we know what’s happening in other locations. I actually found these characters to be a lot more interesting! Maybe cuz they sounded a little crazy from my point of view; they are what this story dark.

I have mostly enjoyed Sun Warrior though it’s a rather long read and I wished I had a dog I could cuddle up with (especially when any of the four-legged companions were hurt!). It wasn’t a hard read but did feel a little like a filler, an in between book. Hopefully, book 3, Wind Rider, will fulfil all promises made in Sun Warrior.

Thanks to Pan Australia for copy of book in exchange of honest review.

PC was born in the Midwest, and, after her tour in the USAF, she taught high school for 15 years before retiring to write full time. PC is a member of the Oklahoma Writers Hall of Fame. Her novels have been awarded the prestigious: Oklahoma Book Award, YALSA Quick Pick for Reluctant Readers, Romantic Times Reviewers’ Choice Award, Booksellers’ Best, and many, many more. Ms. Cast is an experienced teacher and talented speaker who lives in Oregon near her fabulous daughter, her adorable pack of dogs, her crazy Maine Coon, and a bunch of horses.