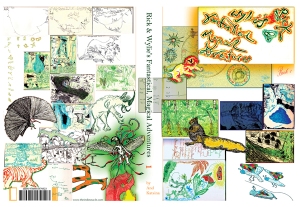 The fabled Hawaiian Menehune people, thought to be invisible except in moonlight, are believed by most to exist only in legend. In actual fact their kingdom has been in deep slumber ever since being attacked, half a millennium ago, by an evil wizard, Wan Chu Fang.

Violently separated during their vacation to Hawaii, Rick, Wylie’s father, must now enter the mystical forest, a huge region found deep within the Hawaiian island, in order to rescue his daughter and try to help her wake the sleeping kingdom. Along with a small group of friends, he is faced with many dangerous situations as they journey through the mystical forest. Wylie’s journey is equally fraught with danger, which unfortunately she must face alone….

Wylie couldn’t relax, the downhill snow run she was soon to face was treacherous, and

she was trading on naught but the reliability of her bark shield, for protection against

the Brujax ice-fire pixie. She had a plan; she would climb out of the Ancient Grand

Tree, and using the vines, would swing over onto a suitable rock protrusion. She would

then work her way down the cliff-side, and settle on the rocks at the edge of the snow

She’d been recalling all the fun times she and dad had enjoyed while skiing. He was a

great skier, and he’d taught her very well. Rick and Wylie had had such good times on

the snow slopes, they’d relished every moment of it.

Spotting her route down was nice and simple. She would take off from the rock ledge,

which would provide a good fast launch off the cliff-side, setting her down, Wylie

reckoned, just before the far end of the ice-glacier, at the foot of the upwards slope on

the other side of the caldera, past the devilish Brujax’s heart.

From her observations of the glacier, Wylie figured the ice-ground was solid, and

would be able to withstand the pressure of her set-down.. ..slam down. Not just that

though, she’d be travelling so fast on her wooden bark shield, touching down on the

ice should give her a great momentum boost, increasing her speed more than enough

to send her snowboarding up the other side of the caldera. She envisaged that if there

were to be any problems; that’s where the encounter would be.

Wylie wasn’t prepared to negotiate with her fears. She concentrated on the fact that her

dad would find her at the Sleeping Menehune Kingdom. That thought alone gave her

all the strength she needed. Reluctantly she began to climb out of the GaldernsBersnuh

Ancient Grand Tree, using the vines to lower herself down onto the cliff-side where the

tree roots were sunken in to the rock-face.

Successfully making it down to a rock outcropping, wide enough to sit on; Wylie began

to arrange her bark shield. Greatly valuing its protective properties, it was extremely

important to her that she didn’t lose her shield, she tied the vine leashes the cherubs

had connected to the bark, around just one of her ankles. If she did come off her bark

shield, it wouldn’t slide too far down the slope without her.

Knowing enough of the possible pitfalls, Wylie understood she was in a highly

dangerous situation; it was a strange feeling, though she did have confidence in her

physical abilities. After all, she’s brilliant at football. She’s a great dancer, everybody

says so, she’s a young ace at martial arts, with lightening quick reflexes… but what felt

so strange was that she wasn’t counting on any of that, Wylie was relying on pure trust

and faith, and that alone.

Hesitating was a mistake, the same applied in any sport, she knew that to be a fact.

Wylie tested the vine leash connection of the bark shield, she really didn’t want to lose

it; it was secure. She prepared herself to go on the snow slope exactly the same way

she did when she was with her dad. Wylie pretended that her dad had just skied across

the Brujax’s caldera and was waiting for her on the far side of the glacier, on the slope

below the other Ancient Grand Tree.

gentle chirping coming from behind her, from somewhere within the Ancient Grand

Tree. Wylie quickly pulled back and leaned hard against the rock outcrop.

I’m English, of rich Irish, African descent. Born in the sound of bow bells, an orphan, I grew up in Manchester, England. Quite a bit more than forty, I‘m a vegan, though occasionally lapse into vegetarianism.

Throughout my school years I was a champion athlete and swimmer, going on to become an athletics coach, swimming teacher and youth leader. After which time I was trained as a Chartered Accountant. Interrupting my training, I branched out, working freelance as a troubleshooter in the field of accountancy. Six years of adding and subtracting, was followed by two years of trading as an international commodities broker. This led me to the sedentary position of ‘trader in antique, oriental carpets’. It was at this juncture that I became completely inspired to become a writer.

As a ‘school kid’ I very much enjoyed writing plays in English, Latin and French. Fortunately for me, writing came naturally. I so, so like writing stories that give people, especially young people, and people young at heart, the chance to exercise their own imagination.

I love taking my readers on fantastic journeys. The enjoyment and taste of adventure my stories give to my readers, warms me greatly.