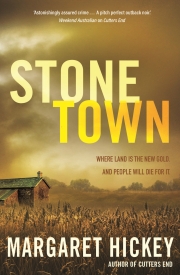 Stone Town is captivating new rural crime drama from the author of the bestselling Cutters End.

With its gold-rush history long in the past, Stone Town has seen better days. And it’s now in the headlines for all the wrong reasons . . .

When three teenagers stumble upon a body in dense bushland one rainy Friday night, Senior Sergeant Mark Ariti’s hopes for a quiet posting in his old home town are shattered. The victim is Aidan Sleeth, a property developer, whose controversial plan to buy up local land means few are surprised he ended up dead.

However, his gruesome murder is overshadowed by a mystery consuming the entire nation: the disappearance of Detective Sergeant Natalie Whitsed.

Natalie had been investigating the celebrity wife of crime boss Tony ‘The Hook’ Scopelliti when she vanished. What did she uncover? Has it cost her her life? And why are the two Homicide detectives, sent from the city to run the Sleeth case, so obsessed with Natalie’s fate?

Following a late-night call from his former boss, Mark is sure of one thing: he’s now in the middle of a deadly game . . .

Cutters Ends, Hickey’s debut, was published last year and I enjoyed it tremendously so it was with keen anticipation, I cracked open Stone Town wherein, once again, we meet Senior Sergeant Mark Ariti. Hmm… confused already? I was pretty sure he was a detective and lived in Adelaide! The first few pages threw me off a bit but a bit later on, I found out that at least a year has passed since Cutters Ends. Only once I accepted that quite some time has passed and a number of personal events occurred with Ariti, did I manage to proceed with the present issue/crime.

I enjoyed this setting quite a lot especially with Mark Ariti resettling himself as a local, living in what was his mother’s but now his home, and just being in the know of the local gossips and networks. Though apparently not as well as he thought. That last twist in the epilogue was just gold!

Once more, Hickey has delivered a remarkable rural crime novel. A rather laidback pacing comparable to a rural kind of life but such twists and turns that shocked and thrilled readers all at the same time. While Stone Town is a sequel, I don’t believe that you need to read Cutters End to enjoy this one. This one reads quite well as a stand alone despite some references to earlier case but you really didn’t need to know. Fair warning, though, you’d probably want to read Cutters End after this, if you haven’t already.

Margaret Hickey is an award-winning author and playwright from North East Victoria. She has a PhD in Creative Writing and is deeply interested in rural lives and communities.