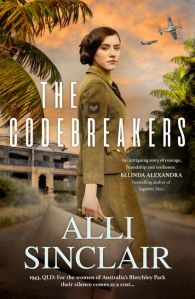 The Codebreakers by Alli Sinclair

They will dedicate their lives to their country, but no one will ever know…

A compelling story about tenacity and friendship, inspired by the real codebreaking women of Australia’s top-secret Central Bureau in WWII. For readers who love Judy Nunn and Kate Quinn.

1943, Brisbane: The war continues to devastate and the battle for the Pacific threatens Australian shores. For Ellie O’Sullivan, helping the war effort means utilising her engineering skills for Qantas as they evacuate civilians and deliver supplies to armed forces overseas. Her exceptional logic and integrity attract the attention of Central Bureau – an intelligence organisation working with England’s Bletchley Park codebreakers. But joining Central Bureau means signing a lifetime secrecy contract. Breaking it is treason.

With her country’s freedom at risk, Ellie works with a group of elite women who enter a world of volatile secrets; deciphering enemy communications to change the course of the war. Working under immense pressure, they form a close bond – yet there could be a traitor in their midst. Can the women uncover the culprit before it’s too late?

As Ellie struggles with the magnitude of the promise she’s made to her country, a wedge grows between her and those she holds dear. When the man she loves asks questions she’s forbidden to answer, how will she prevent the double life she’s leading from unravelling?

464 pages and I read it in a single sitting. Well, practically a single sitting. I had to break to prep for dinner and be “present” at family dinner but other than that, I was basically not “present”. I met Alli for coffee when her last book, The Cinema at Starlight Creek (you should read this one too!), she was doing lots of researching for this book and I was so excited to hear about female Australian codebreakers! I’ve read a bit on Bletchley Park & some women codebreakers (also watched & loved that Netflix series, The Bletchley Circle) so this was a most anticipated release for me and I LOVED it!

‘So we cling to hope and stars?’

There were just many things I loved about this novel. From a most inspiring protagonist to a swoony romance to the realisation of just how many women in the past have fought (and most, in silence) for us to be where we are today (and we are not done!).

The men suffer in silence, never ones to talk about the tragedies they’ve suffered. We women try to hold everyone up with our strength, until our knees shake and our arms threaten to drop the heavy load. But we do it. We carry everyone who needs support. We help the world right itself and nurture those who need it most. Women are incredible creatures; don’t you ever forget it. So, if you have the chance to do something you want, take it and don’t be apologetic. Women spend too much time bowing to society’s expectations instead of allowing ourselves to be who we truly are.

Set in 1940s Queensland, in the height of World War II and its immediate aftermath, we follow Elanora O’Sullivan as she served to end a war she did not believe in, found & lost friends and love, struggled to find her place in the world as a woman who knows she’s as good as the men around her.

The Codebreakers is a fictional tale inspired by just such intelligent, strong, and courageous women and such an empowering story! It’s ticked so many boxes and filled up my heart meter to the max. I cannot wait to see what Alli’s next book will be.

Alli Sinclair, an adventurer at heart, has won multiple awards for her writing. She is Australian and has lived in Argentina, Peru and Canada, and has climbed some of the world’s highest mountains, worked as a tour guide in South and Central America and has travelled the globe. She enjoys immersing herself in exotic destinations, cultures and languages but Australia has always been close to Alli’s heart. Alli hosts retreats for writers and presents writing workshops around Australia, as well as working in film on international projects. She’s a volunteer role model with Books in Homes and is an ambassador for the Fiji Book Drive. Alli’s books explore history, culture, love and grief, and relationships between family, friends and lovers. She captures the romance and thrill of discovering old and new worlds, and loves taking readers on a journey of discovery.