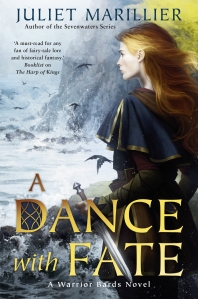 A Dance With Fate (Warrior Bards #2) by Juliet Marillier

An accident. A forfeit of freedom. A descent into danger.

Liobhan, the young warrior and bard, has lost her brother to the Otherworld. Even more determined to gain a place as an elite fighter, she returns to Swan Island to continue her training. But Liobhan is devastated when her comrade Dau is injured and loses his sight in their final display bout. Blamed by Dau’s family for the accident, she agrees to go to his home, Oakhill, as a bond servant for one year.

But Oakhill is a place of dark secrets. The menacing and enigmatic Crow Folk still threaten both worlds and while Brocc battles them in the Otherworld, Dau must battle his own demon – despair.

When Liobhan and Dau begin to expose the evil at the core of Oakhill, they place themselves in mortal danger. For their enemy wields great power and will stop at nothing to get his way. It will take all the skills of a Swan Island warrior and a touch of the uncanny to give them any hope of survival . . .

I feel like I’ve waited too long to get back into this world and yet, it was less than a year ago (just!). I re-read The Harp of Kings before I read this just because I wanted my stay in this world to be longer. I loved that Liobhan and Dau grew so much in the first book and was keen to find out where their next journey will take them to.

In The Harp of Kings, we found out that Dau’s childhood was a terribly scary time that nearly drove him to his death. In A Dance With Fate, we see Dau facing his fears and grew to become stronger and wiser but not alone. As always, his loyal friend, Liobhan, is there with him and for him.

A twist of fate saw Dau blinded and his future bleak. And yet that same twist of fate brought Liobhan to be with him to face his blackest fear. Liobhan’s keen sense of justice and deep friendship for Dau cannot see her standing by when she can see Dau will be alone and friendless where he’s going. Yet, at the same time, she would be brought lowest but because who and what she is, there are many who are pulled to her to render aid and support.

I love the deepening friendship between Dau & Liobhan in this book. However, this is Dau’s story more than anything and I loved it even more as he’s developed into such a magnificent man. Brocc is still around and there were a smattering of his POVs in this book. While I find those to be a bit of an annoyance (they broke the main storyline of this book), I do understand that his arc is an overall one for the trilogy and I hope the next book will see him finding what he is looking for.

As always, such a comfort to read Marillier’s and I never wanted to leave. In fact, the book is still sitting on my soon-to-read TBR because I’m contemplating a re-read already. Truly while she does not spare her characters from pain, they grow so beautifully that it’s a comforting to know that whatever it is you’re going through, you’ll be stronger at the end. Her words of wisdom is a balm in this (our) bleak time.

Juliet Marillier was born in New Zealand and grew up surrounded by Celtic music and stories. Her own Celtic-Gaelic roots inspired her to write her first series, the Sevenwaters Trilogy. Her lifelong interest in history, folklore and mythology has had a major influence on her writing.

Juliet is the author of twenty historical fantasy novels for adults and young adults, as well as a book of short fiction. Juliet’s novels and short stories have won many awards. She is a member of the druid order OBOD (the Order of Bards, Ovates and Druids.)