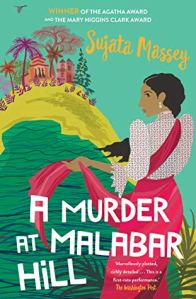 A Murder at Malabar Hill (Perveen Mistry #1) by Sujata Massey

A legally-minded sleuth takes to the streets of 1920s Bombay in a fascinating new mystery.

Introducing Miss Perveen Mistry, the star of an outstanding new crime series. This courageous, likeable and determined young lawyer-turned-sleuth will appeal to readers of Phryne Fisher and Precious Ramotswe in a stunning combination of crime and mystery set in 1920s Bombay.

Armed with a legal education from Oxford, Perveen Mistry has joined her father’s law firm, becoming one of the first female lawyers in India.

Mistry Law has been appointed to execute the will of Mr Omar Farid, a wealthy mill owner who has left three widows behind. But as Perveen examines the paperwork, she notices something strange: all three wives have signed over their full inheritance to a charity. What future will they have?

Perveen is suspicious, especially since one of the widows has signed her form with an X-could she even read the document? The Farid widows live in strict seclusion, never leaving the women’s quarters or speaking to any men. With her own tragic history close to her heart, Perveen worries that the women are vulnerable to injustice.

As Perveen comes closer to the truth, tensions escalate to murder, the widows fall under suspicion and Perveen must figure out what’s really happening on Malabar Hill.

There are certain countries I favour for novel settings and India being one of them. However, I do not like to read too many as they are usually quite heartbreaking to read, for example A Fine Balance, which I read 10+ years ago and still haunted me to this day. Being a mystery lover, too, I just could not walk away from this novel.

A Murder at Malabar Hill follows Perveen Mistry as she conducts her business being the first female lawyer in 1921 Bombay. Even as she works in her father’s firm with the full support of her family (one of the best families I’ve ever read in fiction!), she is mostly working behind the scenes (contracts & wills).

One of her father’s client has passed away without a will and his wives live in purdah necessitating the engagement of a house agent to act on their behalf. Paperworks sent to Perveen, however, raised some interesting questions and as a woman, Perveen can actually interview the ladies. In doing so, unfortunately, she has opened a can of worms… Worse than that, a murder! Yet again, she’s the only woman permitted to enter the zenana to question the ladies. This time, she’s actually courting danger.

In between chapters of the ‘present’, there were chapters relating to her life 3 years ago. I didn’t like these chapters because I never liked reading about the way women were treated then. And it wasn’t just the men, it’s how women treat others too which just makes it sadder. Plus, it was rather disruptive to the ‘present’ narrative. Even if there are only 3 years difference in time, this just highlighted again how amazing the Mistry family is especially Pappa Mistry.

A Murder at Malabar Hill is an enjoyable historical mystery set in an exotic place and time featuring an intelligent & courageous female protagonist who seeks a better future for her country and also her sex. I find the novel to be quite respectful about choice – bad or good, it is the individual’s right to make and no other. Best of all, that ‘girl-power’ moment at the end.

Sujata Massey was born in England to parents from India and Germany, was raised mostly in St. Paul, Minnesota, and lives in Baltimore, Maryland. She was a features reporter for the Baltimore Evening Sun before becoming a full-time novelist. Her novels have won the Agatha, Shamus and Macavity awards and been finalists for the Edgar, Anthony, Harper Lee Legal Fiction and Mary Higgins Clark prizes. A Murder at Malabar Hill was originally published in the United States under the title The Widows of Malabar Hill.

3 thoughts on “Review: A Murder at Malabar Hill by Sujata Massey”