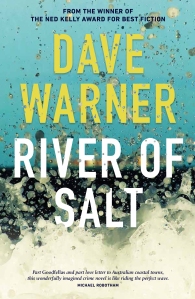 River of Salt by Dave Warner

1961, Philadelphia. After having to give up his brother to save his own life, hitman Blake Saunders flees the Mob and seeks refuge on the other side of the world. Two years later he has been reborn in a tiny coastal Australian town. The ghosts of the past still haunt him but otherwise Coral Shoals is
paradise. Blake surfs, and plays guitar in his own bar, the Surf Shack. But then the body of a young woman is found at a local motel, and evidence links her the Surf Shack. When Blake’s friend is arrested, and the local sergeant doesn’t want to know, it becomes clear to Blake – who knows a thing or two about murder – that the only way to protect his paradise is to
find the killer.

So some GR friends were very excited about having access this as ‘Read Now’ on Netgalley and it was so contagious, I caught it. For some reason though, the words (in the description) ‘reborn’ and ‘ghosts’ made me expect something supernatural?! I don’t really know what my frame of mind was like at that time but my head was definitely not screwed on properly because there’s really nothing supernatural here…

Of course, incorrect expectations didn’t help because whatever I expected never happened and that can let to a disappointment. I’m afraid that even after I read other reviews, I still couldn’t get rid of my original thought. Unfortunately, I’m not a big fan of noir so River of Salt turned out to be just an okay read for me.

I enjoyed the first chapter a lot as it really gave form to the character of Blake Saunders. This is not a novel about the mafia though so he needed to be ‘reborn’ and what better place that some little coastal Aussie town. But even in an out-of-the-way sort of place, there is no avoiding bad things and as Blake tried to get it all sorted, things just kept escalating ’til he came across a ‘ghost’ from his past.

I love the setting (and said descriptions) and secondary characters (especially of the female variety). I’d love to live in a town like that – sounds divine – but I really would not like to live in the 60s as a woman. The mystery itself was astonishing, the climax heartpounding, and the ending, I think this could be a series 😉

Dave Warner is an author, musician and

screenwriter. He originally came to national
prominence with his gold album Mug’s Game, and
his band Dave Warner’s from the Suburbs. In 2017
he released his tenth album When. He has been
named a Western Australian State Living Treasure
and has been inducted into the WAMi Rock’n’Roll
of Renown.