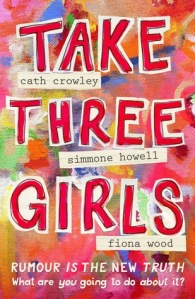 Kate, a quiet boarder, making some risky choices to pursue the experimental music she loves.

Clem, shrugging off her old swim-team persona, exploring her first sexual relationship, and trying to keep her annoying twin, Iris, at arm’s length.

Ady, grappling with a chaotic family, and wondering who her real friends are; she’s not the confident A-lister she appears to be.

When St Hilda’s establishes a Year 10 Wellness Program in response to the era of cyber-bullying, the three girls are thrown together and an unlikely friendship is sparked. One thing they have in common: each is targeted by PSST, a site devoted to gossip and slander that must have a source within St Hilda’s.

Who can you trust when rumour is the new truth?

When I heard about this collaboration happening, I knew it was going to be a cracker! And boy, wasn’t it ever! Take Three Girls is all about potentials; the potentials we all have inside of us but it’s up to us to make it a reality. Take Three Girls is about finding yourself and your place in society; not ‘fitting in’ like squeezing into a tight sexy dress that’s actually terribly uncomfortable but having a place set aside for you because it’s for you. Take Three Girls tackles contemporary teen issues, not sparing the heartaches, tears, and humiliation, with a spectacular triumphant touchdown in the end.

The authors took 3 girls from different walks in life:

placed them in a class where they must ‘work’ together and each found that the other doesn’t really stay in the squares they’ve been fitted into. Despite their differences though, not one of them was safe from a cyber-bully, PSST, a gossip site particularly aimed at the girls at their school. These three girls found themselves supporting each other becoming truer friends each day; they found that they could not let PSST get away with all the pains it caused but how do you fight an anonymous cyber bully?

I must admit to cringing my way through the first half of the book. It was soo difficult to read as I myself am a mother and uncertain myself how to protect or guide my kids through school and life but then there’s another set of challenge in the cyber world! This wasn’t really around yet when I was a teen – I really don’t know how I’d survive it but such is life… I did find it, like the girls did, a bit ridiculous that a male psychologist was cast as the ‘Wellness Program’ teacher but I think that rather portrays just how much we as adults can help or rather how little…

“Why is life so unsimple?”

This is a question that you’d never tire of asking but I am truly grateful though to be reminded that teens are so very resilient and given the chance, they can find their own true paths in life. I realised that especially this year, I’ve been reading through my YA books thinking more like a mother and that’s just my stage of life. I therefore, can definitely recommend mothers to read this with their daughters as there are so many issues open for discussions from career paths, bullying, love, sex, friendship, and family.

Take Three Girls is a novel of empowerment; not just of the feminine but of identity. It is tough, sweet, bitter, beautiful, sour, and everything in between. If you were only going to read only 1 book this year, read this one!!

Cath Crowley is a young adult author published in Australia and internationally. She is the author of The Gracie Faltrain trilogy, Chasing Charlie Duskin, and Graffiti Moon. In 2011, Graffiti Moon won the Prime Minister’s Literary Award for Young Adult Fiction, the Ethel Turner Award for Young People’s Literature, and was named an honour book in the Children’s Book Council, Book of the Year. Cath writes and teaches in Melbourne. Her new book will be published in 2016.

Simmone Howell is the award-winning author of YA novels Girl Defective, Everything Beautiful and Notes from the Teenage Underground. She also writes non-fiction about dream houses, teen movies and ways to map a city. She lives in Melbourne and is currently working on a memoir about her formative female influences.

Before writing YA fiction, Fiona wrote television scripts. She lives in Melbourne with her family. 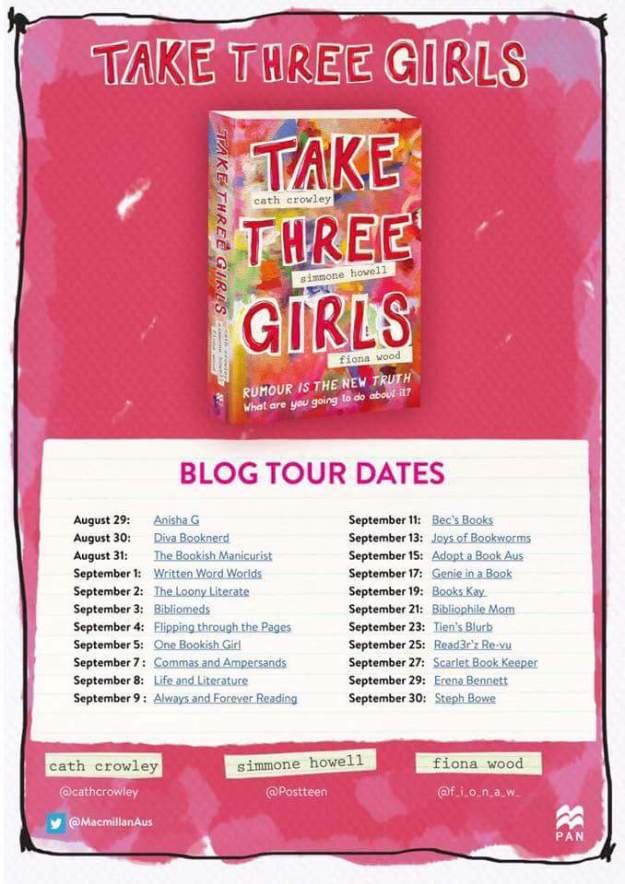