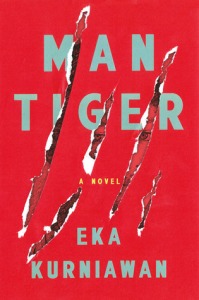 Man Tiger: A Novel by Eka Kurniawan
translated by Labodalih Sembiring
My rating: 4 of 5 stars

I can no longer say that I speak Bahasa Indonesia fluently. I have an Aussie accent now though really, my Indonesian isn’t that bad! In any case, there are always certain things which do not ever translate well and it’s to my advantage that I can mix the two languages. I have, however, a keen interest in translated works especially from Bahasa Indonesia. This was the only basis I had as interest in Man Tiger and boy, I was blown away.

Man Tiger drew me in right from the very beginning and kept me in its grip all the way to the end. The mystery isn’t a whodunit but rather ‘whydunit’. I thought this was a rather a fresh proposal but since I already know who, it might rather be difficult to keep me interested but I was kept spellbound through to the end of the book. The story of the town and of Margio and his family fascinated me with their brokenness, their zest for life, and most of all, their passions.

There were a few things, translation-wise, which threw me off. I think sometimes, you just cannot translate certain things especially when it is a native food with no western world equivalent. It just didn’t sound right. I was also surprised at the sexual content and thought that I probably would not like it if I was reading the book in its original language. For some reason, sexual scenes just sound rather vulgar in Indonesian. A week later, I read an interview of the author, Eka Kurniawan, who stated this exact same thought! Nevertheless, I’m looking to source this when I go overseas next month.

Overall, I found the novel to be reminiscent of Haruki Murakami‘s. The magical realism aspect of the novel was slightly similar to Murakami’s works though the strange factor is not quite at the same level. The ending, I feel, could be Murakami too… It was so abrupt though I really could not imagine what else there is to be so really it was abrupt but perfect.

Man Tiger is a very passionate tale –Passion which drives us to live, to feel, to need, and even drive us crazy. I’m a huge fan of Murakami and I believe, Eka Kurniawan belongs on the same spot in my heart. If you’re a fan of Murakami, I don’t think you’d be disappointed with Man Tiger.