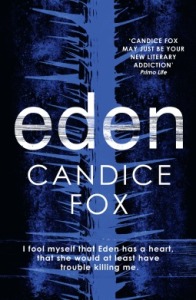 Eden by Candice Fox
My rating: 5 of 5 stars

Please note this is a review of the second book of Archer & Bennett and there may be spoilers in respect to the first book, Hades.

I didn’t know this book was a sequel when I first picked it up. Thankfully, I had thought to look it up first on Goodreads. I tracked down Hades and was absolutely blown away –such an amazing debut! Happily, I then had Eden ready to go and jumped right on it.

I’ve heard that Eden Archer is basically a female version of Dexter. I’ve not read Dexter though I’ve seen parts of the series so I think, this concepts works quite well in describing her. What an amazingly complex character –so damaged yet so aware of it! She also kicks some serious ass so what can I do but fall in love with her.

The story is told from 3 perspectives: Eden’s, Frank Bennett’s (Eden’s partner), and the infamous Hades Archer (Eden’s ‘father’). Despite the multiple POVs, it was quite easy to differentiate which POV you’re reading and as the story took place in a wide ranging situations, I’d appreciate the many point of views as it really gives the story the depth it requires. I really love that we get to read Hades’ background and how parts of this novel took place in a different time.

Whilst I expected the ending (that character is an intelligent one & I expected her to connect the dots), it still did NOT stop my heart from missing a beat as it skipped in excitement for the next instalment. What an utterly brilliant end!! Both Hades and Eden were un-put-down-able and I just cannot wait for more Archer & Bennett.

Thank you, Random House Australia via The Reading Room for copy of book