Please note this is a review of the second book of Serenity’s Plain Secrets and I will try to avoid any major spoilers in relation to book 1 and you can also check my review on Lamb to the Slaughter, here.

I have really enjoyed Lamb to the Slaughter when I participated in that blog tour so I jumped onto this blog tour with no hesitation. Crime / mystery reads are within my comfort zone so this was a pretty breezy read though without enough difference in setting for me to enjoy. I found that I really like Hopkins’ use of Amish communities as setting of her stories –she tries to help the readers explore the Amish world by a character questionings and another’s explanation.

Serenity Adams puts up a tough front and though she is brave, she is haunted by her past –of her thoughts of failures. However, she’s not about to let these stop her from doing her job but rather pushed harder to make sure she will achieve what she sets out to do. And I just love the romantic suspense between her and Daniel.

Whispers from the Dead isn’t a great whodunit. It was pretty obvious who the bad guy was but what makes it an interesting read (aside from the setting) is the how and the interconnectivity between incidents and people. It was an overall good read for me.

As an aside note, I found it confusing of why one wears a ‘toboggan’! And why it was written like a jacket of some sort! Thanks to Google, I found that it’s a brand of clothing… I think that’s why? I’m either just clueless or it’s not a brand that’s widely known, especially in Australia?

I received ebook via Amazon as kindle file so I’m kind of assuming that this was a final copy. I was a little surprised by a handful misspelling throughout the book. I hope this will be fixed. 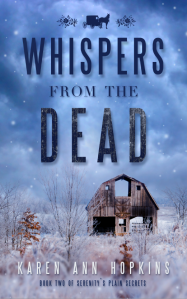 Some Amish communities aren’t so cozy.

Whispers From The Dead is the powerful and thrilling sequel to Lamb to the Slaughter, in the Amish mystery series, Serenity’s Plain Secrets.

Sheriff Serenity Adams and Daniel Bachman are once again partnered up in a criminal investigation, when they travel to a northern Amish settlement that has been riddled by arsons for the past two decades. Serenity quickly discovers that there is much more going on than just barns being set on fire in the touristy community, and that the new group of Amish has their own secrets to hide. She begins to unravel an extensive criminal underworld that threatens to destroy everything that the simple people of Poplar Springs hold dear and once again puts her own life in jeopardy.

And even though Serenity tries desperately to avoid it, things begin heating up between her and Daniel, making her wonder if true love and happiness are really within her grasp. 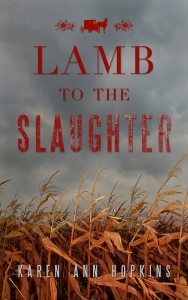 Lamb to the Slaughter is a story about the intertwining lives of three unlikely people in an Indiana Amish Community and the devastating results when a rebellious teenage girl is found shot to death in a corn field during the harvest.

Serenity Adams is the newly elected young sheriff in the country town of Blood Rock and besides dealing with the threatening behavior of her predecessor, she now has a dead Amish girl on her plate.  At first glance, the case seems obvious.  The poor girl was probably accidently shot during hunting season, but when the elders of the Amish community and even the girl’s parents react with uncaring subdued behavior, Serenity becomes suspicious.  As she delves deeper into the secretive community that she grew up beside, she discovers a gruesome crime from the past that may very well be related to the Amish girl’s shooting.

Serenity enlists the help of the handsome bad-boy building contractor, Daniel Bachman, who left the Amish when he was nineteen and has his own dark reasons to help the spunky sheriff solve the crime that the family and friends who shunned him are trying desperately to cover up.  Serenity’s persistence leads her to a stunning discovery that not only threatens to destroy her blossoming romance with Daniel, but may even take her life in the end. 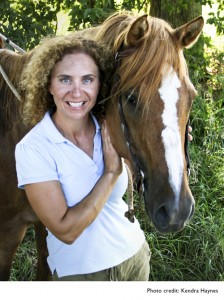 A native of New York State, Karen Ann Hopkins now lives with her family on a farm in northern Kentucky, where her neighbors in all directions are members of a strict Amish community. Her unique perspective became the inspiration for the story of star-crossed lovers Rose and Noah. When she’s not homeschooling her kids, giving riding lessons or tending to a menagerie of horses, goats, peacocks, chickens, ducks, rabbits, dogs and cats, she is dreaming up her next romantic novel.

An exciting prize package for this tour, so make sure to follow along for more chance to win every day!  What’s up for grabs:

Please enter via the Rafflecopter form. Giveaway is open INTERNATIONALLY.

2 thoughts on “Blog Tour: Whispers from the Dead ~a Review”