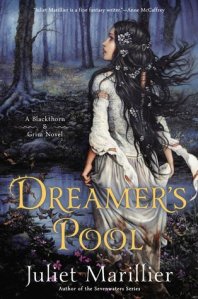 Everything about this book is attractive! The must-read author, the interesting blurb, and beautiful cover… I absolutely HAD to read it. It was a fine read and I quite loved this new world of Marillier’s. As a fan of mystery novels, I am appreciative of the mystery twist woven into a world of fairy tales.

The opening of this novel is somewhat typical to that of fairy tales: a mysterious stranger granting the impossible with conditions followed by a journey. The rest of the story is of a particular mystery but of the “fairy-tale” variety; by this, I mean that the usual trickery of fairy tales written in a similar fashion to that of historical mystery fiction which is fairly unique.

There are 3 perspectives in this story: Blackthorn’s and Grim’s (of whom series is named) then also Oran’s. It’s a little strange that Oran is given his own perspective though this gives the reader that additional dimension in understanding the story. Unfortunately, relative to Blackthorn & Grim, Oran (despite his goodness) is weak. Or maybe I’m just partial to prickly characters ;p

In my point of view, the supposed romance in this book is basically non-existent… this is mostly due to indifference to Oran. Do not read this book for the romance, you’ll be disappointed, but do read it for the tales; the magical & mysterious world. This world isn’t as dark as her other adult fantasy worlds though I still loved it as it was easy to read and enjoy (especially in the middle of the night whilst I’m feeding my newborn!).

Dreamer’s Pool is a fascinating blend of mystery and historical fiction. To me, it somehow resembles Ariana Franklin’s Mistress of the Art of Death with a fairy tale spin to it. If you’ve never read Juliet Marillier’s and are not usually a fantasy reader, this is a good novel to start easing your way into fantasy.

Thanks, Pan MacMillan for paperback copy provided in exchange of honest review