Lamb to the Slaughter by Karen Ann Hopkins

An adult mystery from the author of the young adult romantic Temptation Series!

Some Amish communities aren’t so cozy.

Lamb to the Slaughter is a story about the intertwining lives of three unlikely people in an Indiana Amish Community and the devastating results when a rebellious teenage girl is found shot to death in a corn field during the harvest. 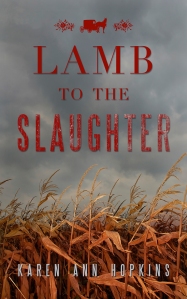 Serenity Adams is the newly elected young sheriff in the country town of Blood Rock and besides dealing with the threatening behavior of her predecessor, she now has a dead Amish girl on her plate.  At first glance, the case seems obvious.  The poor girl was probably accidently shot during hunting season, but when the elders of the Amish community and even the girl’s parents react with uncaring subdued behavior, Serenity becomes suspicious.  As she delves deeper into the secretive community that she grew up beside, she discovers a gruesome crime from the past that may very well be related to the Amish girl’s shooting.

Serenity enlists the help of the handsome bad-boy building contractor, Daniel Bachman, who left the Amish when he was nineteen and has his own dark reasons to help the spunky sheriff solve the crime that the family and friends who shunned him are trying desperately to cover up.  Serenity’s persistence leads her to a stunning discovery that not only threatens to destroy her blossoming romance with Daniel, but may even take her life in the end.

*Lamb to the Slaughter is book one of Serenity’s Plain Secrets.

The basis of this novel reminds me of a Jodi Picoult’s I’ve read years ago called ‘Plain Truth’ which delved into the world of the Amish from a perspective of an outsider.  Both novels are of the mystery / crime genre which is the sort of fiction I enjoyed reading.  “Lamb to the Slaughter” was a fairly easy and enjoyable read.  The characters, the atmosphere of the town / community and the romance were the highlights for me.

There were 3 alternate perspectives to this novel: the main character, Sheriff Serenity Adams, the love interest, and the victim.  The novel began with the incident which, therefore, means that the victim’s perspectives were written in the past whilst the rest of the novel is written in the present.  I’m not really a fan of this sort of back and forth between time setting however it quite easy to catch on as bits and pieces are slowly revealed at around the same section of the novel.

Serenity Adams is an independent and intelligent woman with her own set of issues.  I love that she’s a capable sort of woman and isn’t insecure about her position.  She’s somewhat prickly in the romance department (the reason why is not exactly made clear yet –being the first book of a series) but I think that contributes to the whole uncertainty / excitement with the romantic angle here.

Serenity is surrounded by some interesting characters with their own quirkiness that made up a small town.  Whilst some of these characters barely scratched the surface, I do look forward to see them more developed later on in the series.  These characters definitely made Blood Rock a curious place to live.

The mystery was a little too straight forward for me; being a mystery buff and all.  Indeed there were red herrings scattered throughout but the original and most obvious was the conclusion.  I was really hoping for some twisted ending and whilst it was ‘crazy’ enough, the hoped-for-twist just wasn’t there.

Whilst this novel was somewhat lacking in depth, I don’t believe it to be a novel of exploring the Amish and their belief.  Rather, it was a setting of which the author is familiar with.  Overall, it was an enjoyable read and I look forward to the next book for better character development.

“…If you want a horse to be your friend and work well for you, then you have to be patient with them.” She [Naomi] paused patting the pony on its thick neck before continuing, “You have to be kind to them and give them some freedom.”

We have a really exciting prize package for this tour, so make sure to follow along for more chances to win every day! What’s up for grabs:
• A $100 Amazon Gift Card
• An autographed set of Karen’s YA Temptation series
• A traditional Amish style hand stitched wall hanging/lap quilt with the lone star pattern in country colors
Please enter via the Rafflecopter form. Giveaway is open INTERNATIONALLY.

4 thoughts on “Blog Tour: Lamb to the Slaughter ~a Review”