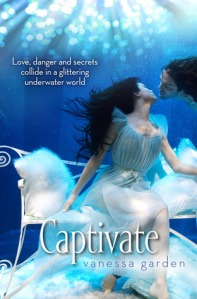 It seems that I’ve been drawn to underwater worlds lately and with such a gorgeous cover, a promising premise, plus being written by an Aussie author, Captivate was a definite pick for me. I also participated in the blog tour recently (see: blog tour post) so I really had to read this for myself.

The mysterious beginning of being kidnapped into another world was really intriguing. Miranda, to me, was quite average. I like her but I don’t love her. There were admiring traits and some really frustrating traits. Robbie, however, I loved! He was (aside from being the said kidnapper) really a considerate, kind, and loyal kind of boy whilst Marko –well, who doesn’t just fall for the broody passionate guy? This book was all about the boys for me.

The underwater kingdom was quite unbelievable. There was enough glitter to appeal but unfortunately, not quite well developed. There were parts that really stumped me and parts that I just didn’t like. An example is a particular thing Miranda had to do which I kind of relate to animal or cavemen (maybe) behaviour but really not one a modern society would adopt. The kingdom may not be as modern as our world but it’s not primitive. There appears to be a somewhat gothic feel as well which was barely touched though I have a feeling this might be something for the next instalment. If it is, I really would love to see this explored.

Miranda is, I found, a tad confusing, especially when it comes to her feelings. I thought there might be something with Robbie, then maybe a love triangle, then maybe not, then… *gah*, you know what I mean. It was just completely bewildering. With Marko, on the other hand, it was pretty obvious that she felt something for him though he was in and out too many times with ‘out’ being predominant that I feel his character wasn’t quite built up and therefore, the potential relationship was a little flat.

I’d like to see where Vanessa Garden will take the next book to. I am keeping my fingers crossed for all my wishlist (I know I most probably won’t get them all) but I think I may just read the next instalment before I shelf this series away. Totes read this book for the boys, peeps!

Thank you, Harlequin TEEN, for ARC in exchange for my honest review